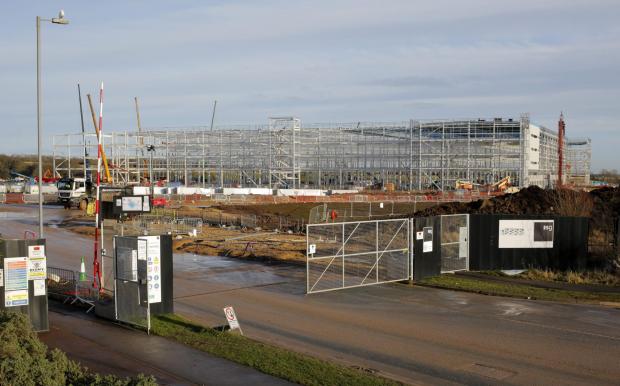 AMAZON will open a fourth warehouse in the North East creating thousands of jobs, The Northern Echo can today exclusively reveal.

The online retailer has confirmed it is in fact behind the enormous development that is taking shape off the A19 in Wynyard, near Stockton.

In recent months, work to build the site has been underway with contractors working round the clock to erect the building at the Wynyard Business Park.

Until now, the development has been shrouded in secrecy as Amazon has refused to confirm or deny that is opening a another “Fulfilment Centre” in the region.

However, in a statement to The Echo, it confirmed for the very first time that it was opening a site on Teesside and that work is now underway.

It said: “We are excited about our latest project in Teesside.

“We are in the very early stages of our development and look forward to sharing more information as the project progresses.”

Earlier this month, sources confirmed the building had been assigned the codename ‘NCL2,’ which follows on from the name given to its latest site, NCL1 in Gateshead.

Plans obtained by The Echo appeared to confirm work was underway for the retailer on a project titled “Amazon NCL2-Stockton.”

Meanwhile, first pictures appear to suggest the building will be roughly the same size as Amazon’s larger Fulfilment Centres in Durham and Gateshead.

As planning permission was first approved in May, this year, it was understood that the site would create more than more than 1,200 permanent roles.

Amazon has not yet confirmed the number of jobs at the Teesside site, but it is now believed up to 1,300 permanent and a further 1,000 seasonal roles could be created.

Anthony Cape, Asset Manager for Northumberland Estates – which sold the land to Amazon – said, the retailer’s arrival would boost plans to put Wynyard “on the map.”

The new site pictured from above Picture: MARTIN SCULLY

Speaking to The Echo last night, he said: This is an exciting development for Teesside which will see between (thousands of jobs) created by Amazon.

“It continues our plans to put Wynyard firmly on the map by attracting quality developments that will further boost the local economy. We wish them every success.”

Once the site opens, almost 5,000 jobs and a further 4,000 seasonal roles will have been created across its Fulfilment Centres in Durham, Darlington, Gateshead and Stockton in the space of just 20 months.

This is in addition to the hundreds already employed at its smaller logistics sites around the region at locations including Washington and Jarrow.

As the retailer opened its newest site at Follingsby Max in Gateshead in September, the promise of more jobs was described as an “endorsement of the region’s status as a great place in which to do business.”

Read more: Exclusive look inside as Amazon opens its third massive warehouse in the North East

Jonathan Walker, who was director of policy at the North East Chamber of Commerce at the time, said: “This announcement is a further endorsement of the region’s status as a great place in which to do business and builds on the strong commitment Amazon has already made to the North East.

“After such a difficult economic period we’re really pleased to see jobs being created that will provide opportunities to people in Gateshead and beyond.”