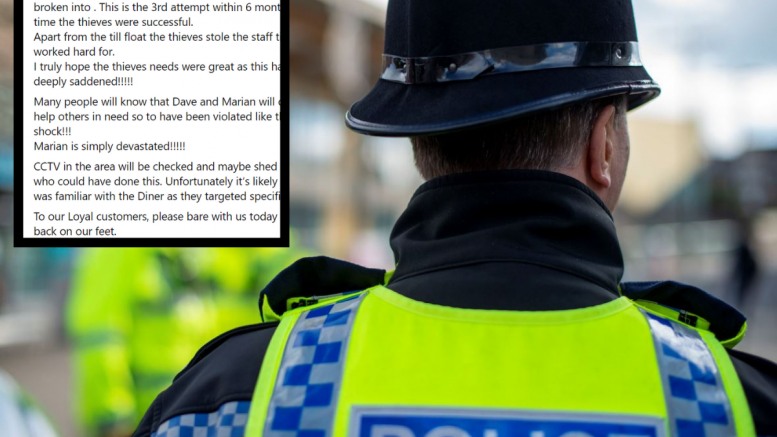 A COUNTY Durham diner has branded the actions of thieves as ‘devastating’ after becoming the victim of a burglary that ransacked the facility of several items and left the staff without their tip jar.

Thames Diner, which is located on Beveridge Way in Newton Aycliffe, was targeted by burglars on Monday (April 26) evening – which saw the restaurant lose its till float, have several pieces of equipment damaged and a substantial amount of tips for its staff taken – totalling £160.

According to the diner, this is the third theft attempt of the Newton Aycliffe food place over the last six months.

Taking to social media yesterday (April 26) morning, Thames Diner expressed their disappointment at being left “violated” by the incident, which has upset their staff and regular customers

A statement from the diner read: “We’re very sad to announce that through the night the Diner was broken into. This is the third attempt within six months, however, this time, the thieves were successful.

“Apart from the till float the thieves stole the staff tips that the girls worked hard for. I truly hope the thieves’ needs were great as this has left our girls deeply saddened.

“Many people will know that Dave and Marian will do what they can to help others in need, so to have been violated like this has been a great shock. Marian is simply devastated.”

Read more: Ex-Royal Engineer made Nazi gesture to Spurs fans during match at Newcastle in October

While investigations continue, the business vowed to “get back on its feet,” but has called for patience from its customers in Newton Aycliffe.

The statement added: “CCTV in the area will be checked and maybe shed some light as to who could have done this. Unfortunately, it’s likely to be someone who was familiar with the Diner as they targeted specific things.

“To our Loyal customers, please bear with us today as we get ourselves back on our feet.”

In an update today (April 27), the diner has thanked members of the community for their help during a “tough time” for the business.

Durham Police have confirmed that they’re looking into the incident, and are appealing for witnesses to come forward.

A spokesperson for the police force said: “We are investigating reports of a burglary at the Thames Diner, in Newton Aycliffe, on Monday night.

“Around £160 in cash and four charity boxes were stolen.

“If anyone has any information, call 101 quoting incident reference number 266 of April 26 or email abigail.hill@durham.police.uk.”

You can also follow our dedicated County Durham Facebook page for all the latest in the area by clicking here.