A FOUNDATION has been set up in memory of a successful York entrepreneur who tragically died last year following a long battle with mental health.

Charlie Dallas Lancaster, just 36, was a former estate agent who went on to run multiple businesses in the property sector – even sitting on the board of charity organisation, The York Round Table.

When he wasn’t working, Charlie was an advocate for many local charities and now his family and friends are now honouring his legacy with the Charlie Dallas Lancaster Foundation (CDLF).

“He thrived in helping others and wanted to make a difference to the lives of those who were less fortunate or needed help.” – Charlie’s family

His two sisters, partner and four friends have already raised £3,000 in the first week of its launch – all going into the pot for organisations across York, North Yorkshire and beyond.

Writing on the CDLF website, the family said: “In the Summer of 2020, a light went out. The world tragically lost a wonderful man, Charlie Dallas Lancaster.

“A friend, a partner, a brother, an uncle, a son and a father, Charlie was the cheeky, smiling face who would light up the room. He was a kind supporter who always encouraged others to achieve their goals with a determined mind who was brave enough to achieve his own dreams.

“Through determination, passion and hard work, Lancaster Samms became, and still is today, a successful estate agency in York. After some time, Charlie made the decision to leave the firm and start out on a new brave venture, MyBid4it, an online property auction site which he worked tirelessly to bring to market.

“He thrived in helping others and wanted to make a difference to the lives of those who were less fortunate or needed help, and The Round Table gave him the ideal platform to accomplish that.” 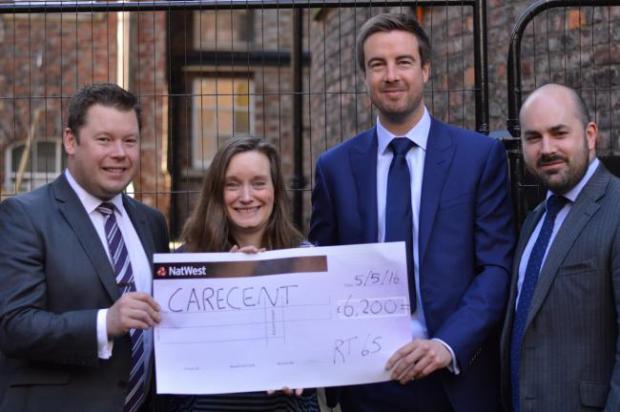 2016: Pictured from left to right are Oliver Bell-Syer, chairman York Round Table, Nicky Gladston, Carecent project leader, and Charlie Lancaster and Martin Frost, both of York Round Table.

In 2019, a staggering 5,691 deaths across England and Wales were classed as suicide and over three quarters of those belonged to men. The Foundation’s first event will see his loved ones run ‘A Mile a Life’ between Sunday, May 23 and Wednesday, June 23.

The month-long challenge will raise money for organisations that were close to Charlie’s heart – York Mind and youth homelessness prevention charity SASH.

Charlie appeared in The Press many times for his dedicated fundraising work. From helping York Round Table donate £6,200 to Carecent, a charity for homeless and disadvantaged people, to raising £2,305 for SASH Sleepout 2019, his impact was felt by many across North Yorkshire.

In addition to the two chosen charities, future fundraising will support The Lions Barber Collective, a charity set up to raise awareness of men’s mental health.

Charlie’s eldest sister Victoria Taylor said: “We want to raise awareness of the importance of good mental health whilst encouraging people to take part, make connections and speak openly about their own challenges.

“We hope that partaking members will be able to create new friendships and in turn, encourage people to speak out if they are struggling.”

While Charlie’s younger sister Alexandra Lancaster added: “It’s great to be able to carry on his legacy by raising money for these brilliant local charities.”

The final day of the month-long challenge will be on Charlie’s birthday with a group walk from York to Charlie’s memorial bench at Bishopthorpe Crematorium.

To get involved in the challenge you can join the Charlie Dallas Lancaster Foundation group on Strava, where miles for the event can be completed by walking, running, biking, swimming or rowing.

You can donate to the Virgin Money Giving page by visiting https://bit.ly/2S8121G or the official Charlie Dallas Lancaster Foundation website https://cdlf.uk/

Jo Stevens from SASH said “We are so grateful to the Charlie Dallas Lancaster Foundation for choosing SASH and York Mind as their nominated charities to receive the funds from this event.

“Charlie was an active supporter of SASH, taking part in our annual sleepout on a number of occasions.

“He will be fondly remembered for his enthusiasm and dedication to the charity, and is greatly missed.”

A CASHBOX robber “whacked” a security guard into his van and ran off with money that could have been spent on council services, York Crown Court heard. York Press | News …

FRIENDS of a teenager who drowned in York’s River Foss have raised more than £1,200 towards an appeal to buy a new rescue boat for the city after completing a gruelling challenge. York Press | News …

A BAR in York has now reopened after a driver crashed a car through the front window yesterday – which caused no structural damage to the building. York Press | News …

A FOUNDATION has been set up in memory of a successful York entrepreneur who tragically died last year following a long battle with mental health. York Press | News …