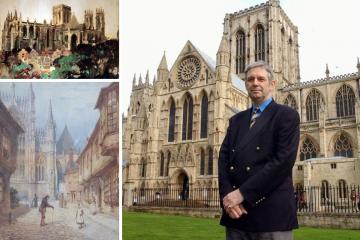 A COLLECTION of paintings belonging to the composer and former Minster School headmaster Dr Richard Shephard, who died last year, will go under the auctioneer’s hammer next week – with the proceeds going to a music charity set up in Dr Shephard’s memory.

During his life, the composer was a keen collector of paintings – and when he passed away early last year, he left them to the charity set up in his name, the Richard Shephard Music Foundation.

“The collection includes paintings of York and York Minster by many well-known York artists – including W J Boddy, George Fall, Tom Dudley, Fred Taylor and John Langton,” said Sir Ron Cooke, the former Vice Chancellor of the University of York who was a friend of Dr Shephard and is a Trustee of the Foundation.

“The collection also includes many images of cathedrals, including Salisbury and Wells (some by Sheppard Dale); and there are plenty of cats and animals.

“Some of the pictures were included in the exhibitions of York Minster Revealed, and The Streets of York book and exhibition.”

The paintings will be sold at auction at Wombwells auctioneers, based at the Northminster Business Park near Poppleton, at 10am on Friday November 11.

There will be a preview at 7pm on Wednesday November 9.

Sir Ron said the money raised from sale of the pictures would go to a good cause.

“In recent years, music teaching in primary schools has declined dramatically,” he said.

“The Richard Shephard Music Foundation was established in memory of Richard, and follows his wishes to reintroduce weekly one-hour music lessons in primary schools in North Yorkshire and Middlesborough.

“Since starting in September, we have established weekly music lessons for over 2,400 children in 12 schools in the region. And the number is rising!

“In addition to the lessons, the Richard Shephard Music Foundation arranges out-of-school events, most recently a combined school singing in the Chapter House of the Minster, and in the Ryedale Festival.”

Dr Shephard, who died at the age of 71 in February last year after being ill for some time, was made an MBE in 2012 for services to music and education.

He was an internationally-renowned composer of church music, as well as a teacher, conductor and chair of both the Leeds Piano Festival and of the Ryedale Festival.

After a private funeral service in March last year, more than 700 people attended a public memorial service for the composer and former Minster School headmaster at York Minster in September 2021.

A catalogue for the auction sale of Dr Shephard’s paintings can be found at www.wombells.co.uk/