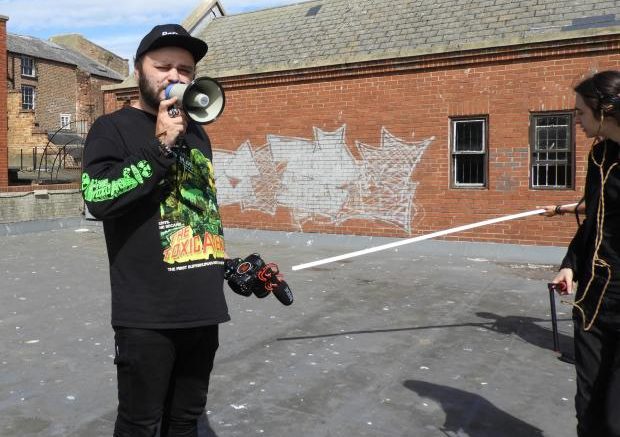 Brace yourselves. Something horrid – something very definitely not for the squeamish – is heading for York.

This weekend, from September 23-25, the city will be playing host to the ‘Dead Northern’ horror film festival. And yes, that title is a play on words. The festival will feature a series of films made by Northern filmmakers. But it will also feature plenty of dead bodies… and bits of bodies.

The mind boggles at what the ‘live horror entertainment’ might involve. But the films that will be screened include the likes of After She Died, Eating Miss Campbell and The Creeping.

Joe’s last film (also his first) was Carnal Monsters, filmed for £500 at an old army base in Driffield.

It tells the story of a mad scientist who, with his team of nurses, develops a technique to stop people dying. Cue the arrival of a pair of serial killers who, when they find out the people they’re trying to kill won’t die, become serial slicers-up instead.

Carnal Monsters was released earlier this year on streaming, Blu-ray and – in the US, where it has achieved a bit of a cult following, Joe says – VHS.

Calling Nurse Meow is a spin-off from that, featuring one of the characters who appeared in the earlier film.

Starring 19-year-old Scarborough lass Kitty Kiss (he can’t reveal her real name, says 30-year-old Joe), it features a woman who is half cat and half human, and can only meow, not talk.

“She’s innocent, but can be a bit psychotic if pushed,” Joe says. Like most of us, then… Nurse Meow is also, however, surprisingly intelligent when it comes to getting herself out of scrapes, Joe says.

Which is fortunate, because the film is a compilation of 11 short films (six made by Joe, the others by other local directors) in which Nurse Meow gets into a series of surprisingly horrid scrapes.

It was filmed in various locations across the North, including Scarborough, Driffield and Harrogate.

But it is in York, on Saturday September 24, that it will be getting its world premiere. Catch it if you dare…

To find out more about the Dead Northern Horror Film Festival, visit deadnorthern.co.uk/