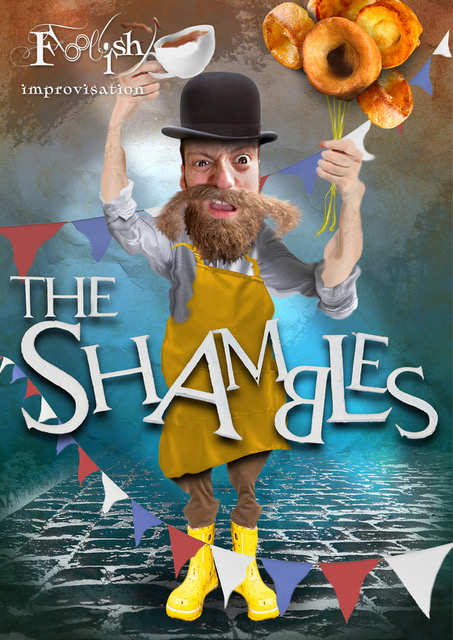 ‘Established purveyors of making things up since 1793’

Yorkshire based improvisers, Fool(ish), are delighted to bring a new kind of improv show to Monkgate Theatre. Inspired by York’s most famous street – The Shambles, is a show where the audience decide on the performance content by writing their suggestions on the floor of the stage. Each cobble will then be used to inspire the scenes, characters and stories of the evening’s comedy.

Fool(ish) is a collection of Yorkshire performers who have been improvising for over 20 years and on a mission to ‘never perform the same show twice’. Since the pandemic they have only been able to create two live shows. Colin was a delightfully silly show performed on the York Theatre Royal’s patio stage and took moments from an audience member’s past to make a life-affirming comedy about living in York. Off The Shelf was a secret gig performed in York Explore to an invited (and socially distanced) audience. In this show an audience member could choose any book from the entire library and let this be the basis for the evening’s entertainment. Fool(ish) are delighted to be bringing their new show, The Shambles, on Thursday 5th May for one night only.

The night promises to bring a new twist on the traditional improv show formats. Co-Artistic Director Paul Birch, has trained in Improv at both I.O and the legendary Second City based in Chicago. Famous alumni of these schools include Bill Murray, John Candy, Joan Rivers, Mike Myers, Stephen Colbert, Tina Fey, Amy Poehler and Keegan-Michael Key. Unfortunately, the pandemic stopped a planned trip for the members of Fool(ish) to travel to Chicago for more training but it also made it possible for the company to be coached and mentored online for two years by Craig Uhlir – one of Chicago’s best improv teachers and a performer in one of the world’s longest running improv teams – Deep Schwa. The Shambles is a show which brings that distinctive Chicago flavour of improvisation directly to York.

Fool(ish are looking forward to welcoming a new audience to a new kind of improv show in which nothing is taken seriously – except creating a joy-filled night of nonsense and fun.