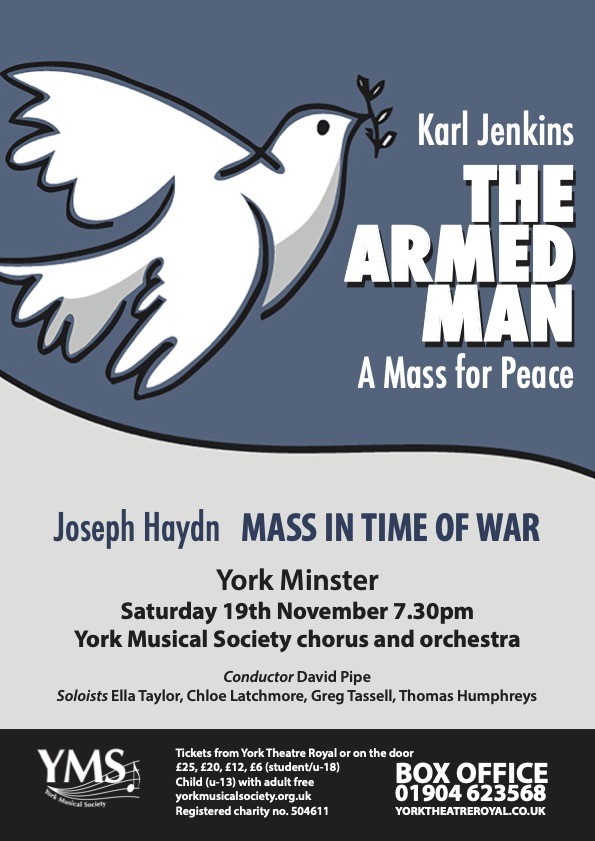 York Musical Society is bringing The Armed Man: A Mass for Peace to York Minster once again, recalling the choir’s masterly performance to a capacity audience there in November 2015.

This dramatic work will be performed by over 150 singers and a full orchestra, with soloists. It draws on secular and sacred texts from around the world, taking in lines by Kipling and Tennyson, words from the Bible and the Mahabharata, the Islamic call to prayer, and much more. The music styles are equally wide-ranging.

Composer Karl Jenkins was commissioned by the Royal Armouries Museum to write a work to mark the transition in 2000 from one millennium to the next. It reflects on the passing of ‘the most war-torn and destructive century in human history’ and looks forward in hope to a more peaceful future.

Joseph Haydn’s Mass in Time of War was written in 1796, when Napoleon’s army was winning victories in Italy and Germany and threatened his homeland, Austria. The music reflects troubled times, yet is lyrical and joyful.

Both works express the belief declared in The Armed Man, ‘Better is peace than always war’.

Tickets available in advance from York Theatre Royal box office (01904 623568; www.yorktheatreroyal.co.uk) or on the door on the night.