She Was Walking Home 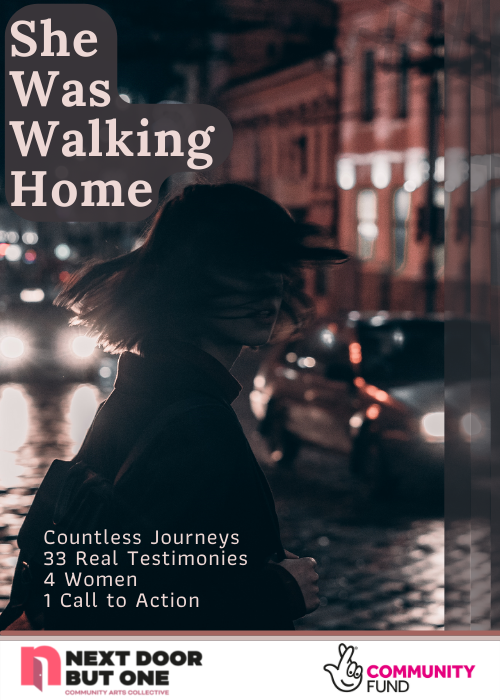 She Was Walking Home: New Production Aims to Put the Focus on the Voices of Local Women, But Not the Responsibility or Accountability for Their Safety.

Last year, for the first time, The Office for National Statistics (ONS) released data on how safe people feel in different public settings. One in two women felt unsafe walking alone after dark in a quiet street near their home, or in a busy public place and two out of three women aged 16 to 34 years experienced one form of harassment in the previous 12 months. And behind every one of these statistics is a true story of harassment, abuse, rape or even murder – a life changed forever. “We cannot let statistics dehumanise what is actually happening or forget the real voices behind each lived experience.” says Associate Director of Next Door But One, Kate Veysey. This is what the theatre company’s new touring production is aiming to do.

Originally produced as an audio walk around the city centre in 2021, She Was Walking Home is a series of monologues created from the testimonies of women living, working and studying in York. “We created this production in response to the heartbreaking murder of Sarah Everard and the understandable shock and uncertainty it caused in our local community” continues Kate. “We wanted to amplify the voices of local women, whilst also prompting conversations around where responsibility and accountability lies for their safety. Since the original audio walk, listened to by almost 800 people, there have been further attacks and murders of women, including Sabina Nessa and more recently Ashling Murphy, and still the rhetoric seems to be skewed towards rape alarms, trackers, self-defence classes and dresscodes being the solution. We needed to continue and challenge this conversation.”

And with that, Next Door But One are touring a live adaptation of the production written by Rachel Price and performed by a cast of 4 women to libraries, pubs, theatres and universities in May and June, hoping to bring this very real issue home with the experiences encountered on the very streets that make up York. The invitation is to come and watch, listen, but also to think ‘what is it that I can do in making the women in our community safer?’

Alongside the touring performance, Next Door But One are creating a digital pack for schools and community groups, including a recording of the performance and a workbook containing prompts for debate and conversations which will lead to change. “As a company we want the theatre we make to be as useful as it can be; a tool that supports people in the ways they need.” says Creative Producer El Stannage. “The tour will be reaching different communities through the venues we are visiting, but equally the digital pack can be used to evoke conversations now, for change that will be seen into the future; empowering girls to report experiences of abuse and harassment, and raising awareness of how boys and young men can be better allies in keeping women safe, for example.”

If you think your school or community group would benefit from the production’s digital pack, please email nextdoorbutone@outlook.com for more details.