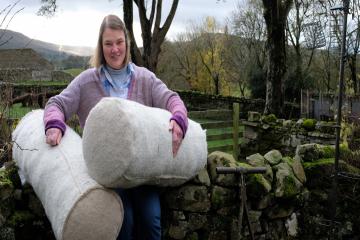 An entrepreneur has been awarded a grant to develop a trial which uses Swaledale sheep fleeces to protect ancient upland peat bogs.

Ruth Lindsey from Hardraw in Upper Wensleydale is producing woollen logs to preserve water and restore peatland in North Yorkshire.

From the nineteenth century onwards, huge numbers of ditches were dug in upland peat bogs in an attempt to drain them to make the land available for livestock to graze upon.

Healthy peatland is able to pull in and store huge amounts of carbon from the atmosphere, and maintaining these upland systems increases biodiversity as well as having the ability to help reduce downstream flooding.

At the minute huge amounts of coconut husk are imported and manufactured into coir logs which are placed across gullies to try and stop further erosion in both Yorkshire and Cumbria. The logs stop heavy rains from washing away the exposed peat, which allows mosses and other vegetation to re-establish in the ecosystem.

The trial using 30 of Ruth’s wool logs will take place this winter at Fleet Moss in the Yorkshire Dales National Park.

This ancient peatland has existed for around 6,000 years as a habitat for diverse flora and fauna but has only been under threat for the past century or so after successive landowners have tried to drain it. Because of the damage done to Fleet Moss over the years, it’s known locally as ‘The Somme’.

It’s hoped that the wool will prove to be an effective alternative to imported coir and reduce the carbon footprint of the raw materials used in maintaining these ancient ecosystems as well as increasing the demand for wool for local farmers.

Over a million pounds has so far been awarded in grants to 86 businesses, while more than a million pounds remains to be awarded for other projects, which the authority is inviting farmers to apply for.

Mrs Lindsey trades as Natural Dales Wool Products, and began to think about new uses for wool after learning from a farming friend that Swaledale fleeces, which are short stapled and coarse, were only being sold for 8p per kilogram.

“It costs between £1.20 and £1.50 to pay someone to clip a sheep.  If you get two kilos of wool from a Swaledale ewe you’re doing well. Then the farmers have to transport it to the British Wool depots at Marrick or Ingleton. So they are making a massive loss. That’s why mountain wool is being burned or buried or left in barns.”

A coir log across an erosion channel at Fleet Moss in the Yorkshire Dales.

The inspiration for turning fleece into logs came to Ruth after she read an article in The Northern Echo. With experience from working in her family’s former wool business, The Multiple Fabric Company, Ruth had contacts in West Yorkshire who were able to help in manufacturing the wool logs.

“For the past two years four farms have given me their wool, although in future I want to be able to pay for it. This year the fleeces were baled at Thwaite Bridge Farm and put into wool sheets and taken Salts Mill [in Saltaire] to be stored. They will soon be going to Dewsbury for scouring,” she said.

Once scoured the wool is stuffed into one metre-long logs made from felt. Mrs Lindsey is also selling the felt at a local business in Hawes for use as a mulch around trees or in garden beds.

She said: “From start to finish the wool travels 145 miles, whereas with coconut fibre has travelled thousands of miles. The amount of wool that could be used on bogs is astonishing. But there are a lot of unknowns. We don’t whether the wool fibre will last as long as the coconut fibre. We don’t know whether it’s going to hold the water back. That’s why we’ve got the trials going. The idea is to support the local community by using local wool for local peat.

“We want to be able to pay 50 pence per kilo of wool. That still wouldn’t cover the cost of employing a shearer but it would be getting there.”

Speaking about the grant programme, the Member Champion for the Natural Environment at the Yorkshire Dales National Park Authority, Mark Corner, said: “Farming in Protected Landscapes is there to support hill farms as they prepare for life without the government’s Basic Payment Scheme. It is vital that these businesses identify new income sources and prepare themselves for the transition to the new Environmental Land Management schemes. As a society, we need viable farm businesses that can help to tackle the nature and climate emergencies.

“The grant for Natural Dales Wool Products to test the idea of whether wool can be used in peatland restoration is exciting and eye-catching, and it is one of the more unusual awards. We have previously highlighted how the programme has funded wildlife habitat creation and regenerative farming. There are many other ways the programme could be used to support new income streams and diversification options. Farmers with potential projects are warmly invited to get in touch.”

If you want to read more stories, why not subscribe to your Northern Echo for as little as £1.25 a week. Click here