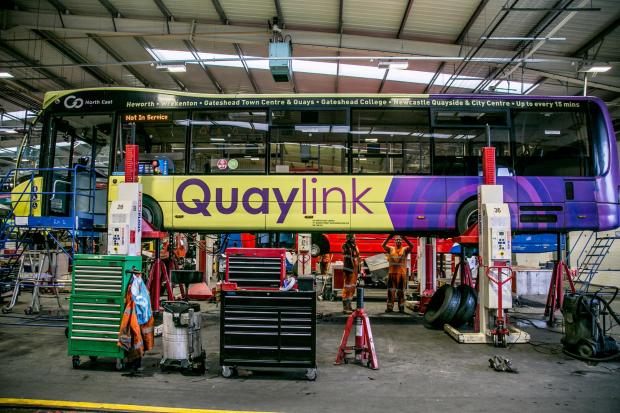 A NORTH EAST bus company which faced criticism after offering an “insulting” pay rise has resolved the long-running dispute, avoiding strike action in the run up to Christmas.

Go North East faced a potential walkout after drivers across the company rejected a series of pay offers rising from two to 3.5 percent over the space of several months.

At the time, drivers accused the company of “wasting thousands” on refurbishments of buses in favour of offering a “suitable” pay offer which they said did not reflect inflation.

Meanwhile, drivers claimed rival operators had offered a higher pay rise and cash bonus which had contributed to further “ill-feeling” among the workforce.

But the company last night said an increased pay offer of five percent had been accepted by the majority of workers as it said it “recognised the hard work” of its team.

One worker, who wishes to remain anonymous, said drivers in their depot had welcomed the new offer, but said it could have been agreed sooner to prevent aggravation.

They said: “I’m pleased it’s all out of the way as it’s been dragged out for months now starting with what were insulting offers made under the pretence that the company couldn’t afford to pay a decent wage.”

The company previously refuted claims it had wasted money on repainting buses as it said their rebranding had been part of an ongoing programme of fleet investment which pre-dated the pandemic.

Meanwhile, it maintained that the bus industry was still “heavily loss making” as it tried to recover from the impact of the Covid pandemic and reduced passenger numbers.

But speaking to The Northern Echo Stephen King, Commercial Director at Go North East, said the fifth pay offer had been made in balance of rewarding staff and protecting jobs.

Explaining that lengthy pay discussions had been made further complicated by a range of factors, he said the company had been “pleased” that a resolution had been agreed.

He said: “We are pleased to have finally concluded this year’s pay deal with our workforce and their Trade Union representatives, resulting in a five percent pay increase for all grades and backdated to July, with our new starter rates already further enhanced at a higher rate outside of these talks.

“In transport and many other sectors, it is not unusual for pay talks to be concluded sometime after the pay anniversary date, and to be backdated.

“Reaching agreement this year has been further complicated with the high turnover and competition that has emerged in the jobs market, and not just in the transport sector, over recent months, as well as rapidly rising inflation.

Read more: Behind the scenes at Go North East’s depot in Consett in County Durham

“It has been important to balance recognising the hard work of our team and keeping our jobs attractive in the market, with protecting the company and jobs in the context of much reduced passenger numbers and revenue as we emerge from the depths of the pandemic, which has resulted in, what is hoped to be short-term, financial losses.

“In agreeing this deal, we are trying to take a long-term view with our greatest valued asset – our people.”

Mr King said that the company had seen a number of new recruits in recent weeks and that it was hoped the enhanced pay deal would help further boost numbers as well as retain workers.

He said: “We’ve had a number of new recruits join our team recently, and we hope that resolving this year’s pay deal will further cement the recruitment and retention of colleagues and now allow for an even greater focus on delivering the best possible service for our customers to get more people back on board our low carbon and low cost transport, and play an important role in reducing congestion, improving air quality and connecting our communities.”

But Go North East has not been alone in facing backlash from drivers and potential disruption ahead of the festive period.

Stagecoach North East saw services cancelled in the first week of November as workers at depots in Stockton and Hartlepool called for better pay.

The company, which also saw problems at its depots in Tyne & Wear, had been accused of “divide-and-rule” tactics prompting one Teesside MP to weigh in.

However, further strike action for December was last week called off as bosses confirmed an improved pay offer had been struck with both depots on Teesside.

You can also follow our dedicated County Durham Facebook page for all the latest in the area by clicking here.