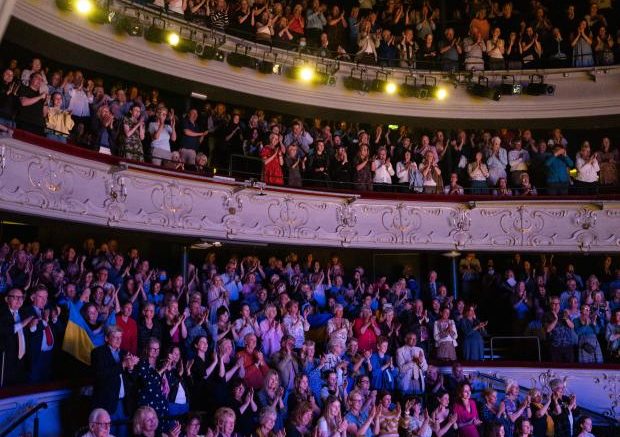 THEY may not have been wielding guns in defence of their homeland.

But the dazzling dance moves members of the Kyiv City Ballet brought to the Theatre Royal stage last night proved to be hugely effective ‘weapons’ in their own right.

The final number in an evening of short dance pieces from their repertoire was ‘Boys from Kyiv’ – a rousing, Cossack-style routine full of cheeky, macho squats and leg kicks.

It was staged as a ‘battle’ between two teams of male dancers – one dressed in yellow, one in blue, to make up the colours of the Ukraine flag. It was funny, it was cocky, it was defiant – a ‘v’ sign in dance form to Putin and all those who think war is a good way to settle problems.

It prompted a standing ovation from a full house which went on and on as members of the ballet company trooped on to the stage for their final bows – and which continued as the curtain rose and fell several times.

The shouts, whistles and thunderous applause were accompanied by blue and yellow flags and ribbons waving in the audience. The message: we’re with you and war cannot be allowed to win.

It was the finale to an evening of decidedly unusual, wildly imaginative ballet which had been funny, touching and – just sometimes – angry by turn.

The entire troupe were on stage as Ivan led them through a series of training and warm-up routines, practicing arabesques, pirouettes, pliés and jetés.

It was a chance to get a glimpse ‘behind the scenes’ at the hours of effort, drill and routine that go into honing ballet moves – and it was also surprisingly funny.

Ivan proved to be a natural showman, winking at the audience, and walking off stage with his fingers ostentatiously crossed when he asked his troupe tackle a particularly difficult routine.

It was the perfect appetiser. Then came the interval. The second part began with the reading out of messages of support for the stranded ballet troupe, who have been based in Paris ever since Ruissia invaded their country on February 24 – including one from the Archbishop of York, Stephen Cottrell, who said: “It is through performances from our brothers and sisters on stage tonight, showcasing the very best of their rich cultural heritage that many will be uplifted by their talent and sheer determination to continue amid such adversity.”

Then the dancing proper began.

First up was a scene from Swan Lake – all saccharine sweetness laced with pain, as ballerinas contorted their arms like birds’ wings or the long necks of swans.

That was followed by Thoughts: a stark, muscular piece of contemporary ballet in which a single, spotlit male dancer – Vladyslav Dobshynskyi – leaped and writhed across the stage, his twisting body seeming to express anger, outrage and defiance all at once.

Dancers from the Kyiv City Ballet at York Theatre Royal in a scene from Swan Lake. Picture: Tom Arber

There was an extraordinary ‘dying swan’ routine from ballerina Kristina Kadashevych, her arms expressing miracles or agony as she fluttered brokenly about the stage; and a bawdy, funny routine set to Theodorakis’ ‘Zorba the Greek’ in which a male dancer dressed like a lusty Greek god pursued a ballerina made up like a Greek nymph, all in lighting that brought to mind a harsh Mediterranean sun. Her pert slapdowns and his laddish refusal to take no for an answer brought gales of laughter.

Then came that blue and yellow dance of defiance – and the standing ovation which accompanied it – that brought the evening to an end.

Whay do you do if you’re a ballet troupe stranded abroad when someone invades your country? You dance, defiantly, just like this. Brilliant.

THEY may not have been wielding guns in defence of their homeland. York Press | What’s On…

A WINNING lottery ticket was purchased in the North East – and the person who has claimed it has revealed what he will spend it on. The Northern Echo | Business News …

Hollywood actor Johnny Depp will join Jeff Beck for the remainder of his UK tour – including a performance in York, it has been confirmed. York Press | What’s On…