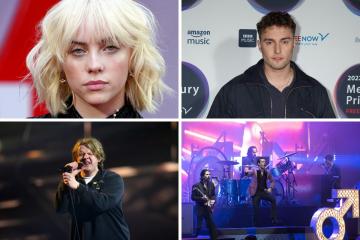 SIX of the biggest names in music have been announced to headline a major music festival near York.

Leeds Festival will return for 2023 with a dual main stage layout meaning more acts can play with less clashes.

The three-day festival will take place on August 25 to 27,  2023, returning to Bramham Park – between Leeds and Wetherby.

General sale tickets and instalment plans are available from 9am on Monday, 12 December from www.leedsfestival.com/tickets

At 20-year-old, Billie Eilish is set to become the youngest-ever solo artist to headline Leeds Festival.

The Grammy award winner’s latest album ‘Happier Than Ever’, was released last summer to global critical acclaim and topping the charts in nineteen countries worldwide.

Billie was also the youngest artist to write and record an official James Bond theme song, ‘No Time To Die’, which won an Academy Award this year.

Since then, 2021’s ‘Seventeen Going Under’ has seen the Geordie artist become a household name across the globe.

Foals first headlined Leeds Festival in 2016, and the chart-topping, BRIT Award winners recent album ‘Life Is Yours’ was purpose-written for a euphoric festival summer with joyous, dance-influenced tracks and a jubilant message.

From their earliest hits and through their record-breaking seven consecutive Number 1 albums, the band spans true modern classics such as ‘Mr Brightside,’ ‘Somebody Told Me’ and A’ll These Things That I’ve Done,’ via ‘When You Were Young’ and ‘Dustland Fairytale,’ ‘Human,’ ‘Runaways,’ to more recent favourites like ‘The Man,’ ‘Caution,’ ‘Run For Cover’ and ‘My Own Soul’s Warning.’

Imagine Dragons will headline the festival for the first time.

Counting tens of millions of album sales and over 110 billion total streams, they stand out as the only band in history to earn four RIAA Diamond singles and a multitude of multi-platinum singles in ‘Radioactive,’ ‘Believer,’ ‘Demons,’ and ‘Thunder.’

Read about this year’s Leeds Festival