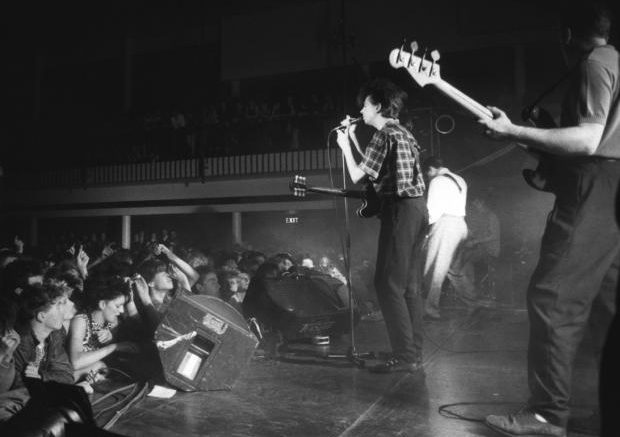 ALISON O’Neill has never exhibited her photographs of 1980s’ rock musicians until now.

Why? “Shyness,” says the North Yorkshire photographer and language services translator, whose Trapped In The Light exhibition of Robert Smith, Ian McCulloch et al is running in the Sky Lounge the upstairs corridor at City Screen Picturehouse, York, until September 10.

“Being in the right place at the right time takes luck and a bit of determination, and in the ’80s I had both, when I got to know The Cure and Echo & The Bunnymen,” she says. “The opportunity this gave me yielded photos that show a fan’s eye view of bands both on and off stage.

Echo & The Bunnymen at Lancaster University in 1984. Copyright: Alison O’Neill. For one use only online and in print for The Press, York

“All the musicians I met were very friendly and open and generous with passes and access. It was a lot easier to meet bands in those days. The Cure, in particular, often hung around after the show to sign stuff for anyone who wanted, so you could get to talk to them then.”

Was Alison subjected to the infamous “First three numbers and No flash” rule? “Not in relation to the pictures in this exhibition,” she says. “I was an amateur photographer, so often I couldn’t get my camera in at all, but in some cases the bands gave me passes, other times the venue wasn’t as strict. I didn’t use flash much anyway.”

Her black-and-white photographs have remained filed away since those Eighties’ days, most seen only by Alison’s friends. The drive to exhibit them was finally sparked by attending exhibitions by a friend in Berlin and rock photographer Richard Bellia in London.

“When I asked around, City Screen were the first people to say yes to an exhibition and it’s a brilliant space,” says Alison. “Originally it was due to happen in May 2020 [before Covid intervened], and so the last two years’ wait has been worse than the 30-plus before.”

On show are photos taken between early 1982 and 1989 at locations from London to Edinburgh, featuring The Cure, Echo & The Bunnymen, The Jesus & Mary Chain, The Cramps, Wilko Johnson, Alan Vega and local bands.

She was drawn to photographing rock bands by “the passion, the emotion”. “I fell in love with music in my teens, and when I started photographing musicians, I realised that as they were engrossed in what they were doing,” says Alison. “They aren’t (usually) self-conscious about photos being taken.”

One last question: was it more difficult for a female photographer? “It certainly was to be taken seriously. I imagine it still is,” says Alison. “I could dine well on the number of people, including friends, who, learning about my music fandom go, ‘oh, so you’re a groupie’. Cue Paddington death stare.”

Trapped In The Light, 1980s Music Photos by Alison O’Neill, runs at Sky Lounge, City Screen Picturehouse, Coney Street, York, August 7 to September 10. Admission is free, open daily. Limited-edition framed prints can be ordered at £195 to £395, depending on size.