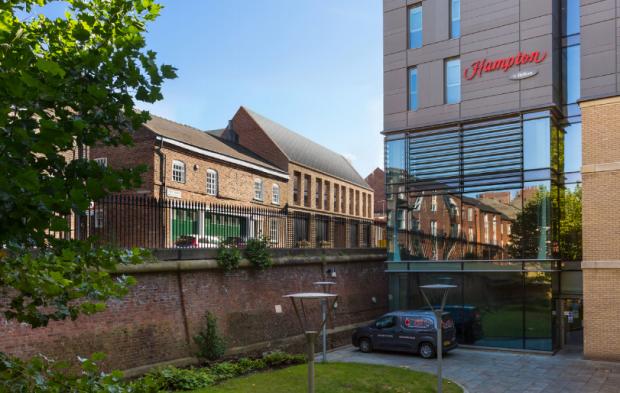 PLANS have been submitted to create a new 500-capacity music venue in York city centre – transforming a “derelict” site in the area.

The new venue, which will be opened at the empty site of the former Fibbers live music venue in Toft Green, will be operated by Jimmy’s – owned by brothers George and Jimmy Craig.

The brothers, who have a shared passion for supporting emerging musical talent and delivering a great night out, opened a ‘Rock n Roll’ themed restaurant in Low Petergate last year – and they now plan open the new venue in the city to help boost the live music scene.

A design of the new music venue in Toft Green

Speaking on opening the new venue, George said: “The opportunity to re-establish such a significant live music presence in our home city is a dream realised for us.

“The venue puts York back on the map in terms of the UK touring circuit which will offer first-class facilities for established bands and will support emerging talent which is core to our ethos.”

Meanwhile, a spokesperson for North Star, who are working alongside Jimmy’s, added: “Creating a new music venue in York will be great for the cultural scene in the city and we are thrilled to be able to partner with such a great company in Jimmy’s.

“It will be a fresh concept and will help the city attract top bands and musicians in a purpose built and modern premises, building on the legacy of live music on this site from Fibbers.

“We have listened to feedback from a wide range of people, and these plans are a direct result of this dialogue.”

The original plan, submitted in 2020, would have seen the building transformed into office space only by the site owners Toft Green Developments. But, the new site will see the live music venue opened on the ground floor with Grade A offices located above. This has been recognised by City of York Council – and supported by its Economic Development Strategy and the emerging Local Plan.

The alterations in the revised plan, submitted by York-based architects Vincent and Brown, include removing a storey of the building, making it two rather than three storeys and alterations to the roof – as well as minor alterations to the office space above the music venue. The ground floor external area will be removed to ensure there is space for the live music venue.

One of the concerns of the original plan was the loss of a music venue in the city – which the revised plan takes into consideration.

The venue will also be specifically designed to mitigate noise pollution to the neighbouring properties, with improved acoustic insulation and measures.

In July last year, squatters evicted from the York Barbican area occupied the former Fibbers site, before they were evicted in September after a repossession from developers, North Star.