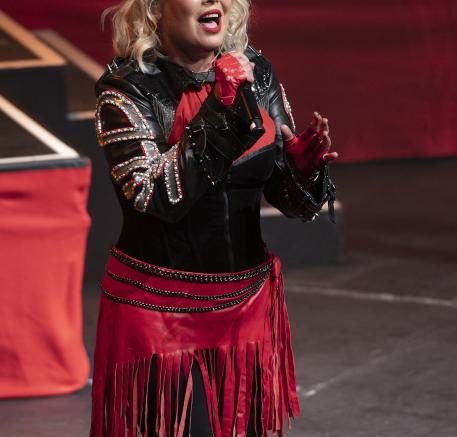 Anyone has attended one of 1980s themed concerts such as Rewind or Let’s Rock knows the score. Acts that were chart regulars during that decade performing a crowd-pleasing set of thirty or perhaps forty minutes.

Kim Wilde can often be found on these bills and while a short set often provides enough opportunity to cover a band’s hits, in Wilde’s case – with twenty top-forty singles to her name – a short set inevitably leaves you feeling short changed.

Happily, Wilde’s current Greatest Hits tour, delayed from 2020, arrived at the Barbican last Saturday and saw her and her cracking band deliver a full show that comprised many of her hits. It was so enjoyable that time – as well as the years – simply flew by.

Opening with Rage To Love and Never Trust A Stranger the band simply didn’t take their foot off the pedal and kept the energy high throughout the show with just a few breaks for a chat with the audience.

Her cover of the Bee Gees’ If I Can’t Have You was terrific and other highlights included Water On Glass, Four Letter Word, Cambodia and Chequered Love.

The setlist also managed to mix in a couple of more obscure singles like Million Miles Away and Perfect Girl as well as a few more recent tracks most noticeably Kandy Krush and Pop Don’t Stop from 2018’s Here Come The Aliens album.

Visually the show was exciting and full of action. Wilde herself still looks wonderful with her tousled blonde hair, a slash of red lipstick and her figure hugging red and black leather stage wear.

Her band – who have been with her for some years now – added to the spectacle. Two drummers, keyboards, bassist Paul ‘Coops’ Cooper (resembling Spiderman’s roguish grandfather) along two guitarists including Kim’s brother Ricky and her niece Scarlett on vocals made the whole thing a fun, family affair.

The main set finished in fine style with a great version of the Supremes’ You Keep Me Hanging On, with Wilde proving she still has the moves and a great voice. The encore included You Came, and for her final number, her breakthrough hit Kids In America.