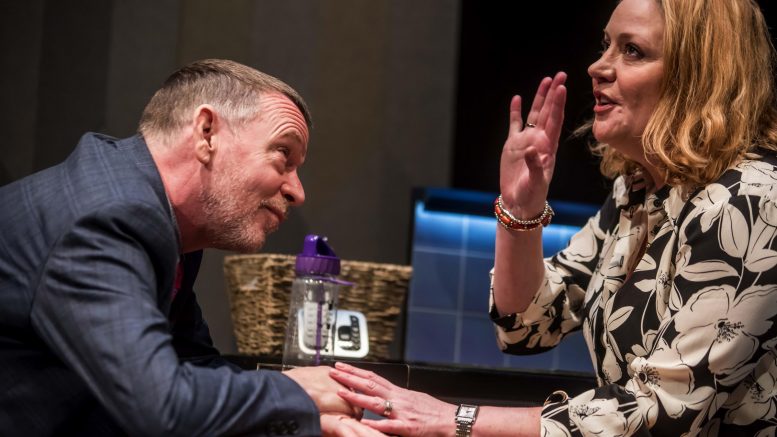 Firstly, it is the latest in the production line of Detective Superintendent Roy Grace cases to be transferred from page to stage, adapted from Peter James’s stack of best-selling crime thrillers by Shaun McKenna.

Secondly, Adam Woodyatt and Laurie Brett reprise their brand of marital bickering patented in the guise of Ian and Jane Beale in the aerated London soap wars of EastEnders.

Brett has joined Jonathan O’Boyle’s company for the tour’s second leg, taking over from Gaynor Faye, and her partnership with Woodyatt is marked by a fractious telepathy that only comes with years of performing together.

Brett is not the only new ingredient. After the press night, in a brief chat before he headed off to Mad Alice’s Bloody Tour of York, cast member Leon Stewart revealed the ending had been changed to make it less easy for amateur Roy Graces to detect.

Brett’s Kellie Bryce is hiding her supposedly dormant drink habit from her pre-occupied husband (Woodyatt’s Tom), sipping vodka from her water bottle when he is not around. She is forever cleaning the smartly decorated house, when not buying dresses and expensive foodstuffs.

Woodyatt’s Tom is a businessman, but a weary and brassic, greying and grizzled one after over-stretching himself, mortgaged to the hilt, and now he is in need of a fast financial fix.

Tom had arrived home with a USB memory stick left on a train, saying he wanted to contact whoever had left it behind. Smartass student son Max (Luke Ward Wilkinson) is a tech wiz, but when he helps his dad to download the contents, they inadvertently witness a murder (Natalie Boakye’s Janie), enacted on a mezzanine level on Michael Holt’s slick set.

Don’t contact the police or tell your mum, says Tom, but that would rule out Roy Grace, wouldn’t it, and no Grace, no crime thriller. Ah, here he comes, on the design’s third piece in its jigsaw that slides in from the side to denote a slither of a police station. Harry Long’s matter-of-fact Grace is working in tandem with Leon Stewart’s Glenn Branson, his junior who loves a pun-laden joke.

Looking Good Dead moves at a cracking pace, with plenty of humour, some of it deeply cheesy, some of it rooted in the ebb and flow of family squabbles, but all the while James’s story is piling up twists and turns, intrigues and surprising revelations, weaving in new characters, such as Ian Houghton’s wealthy, smooth-talking American, Jonas Kent.

Didn’t-see-that-coming surprises prevail over suspense in script and direction alike, each conducted with a gleeful flourish that contrasts with the steady-eddie investigations of Long’s Grace in a story that takes in snuff movies, dung beetles, Wagyu steaks, even a modicum of social comment.

Looking Good Dead is fun, corny and self-aware, and if Woodyatt and Brett’s sparring in EastEnders left you cold, here comes their comic relief, unexpected but surprisingly enjoyable.