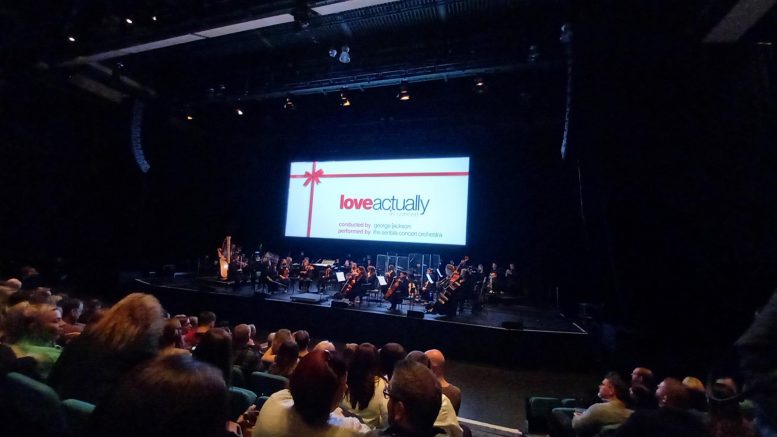 THE trend for marrying the screening of a hit movie with a live orchestra continues with a tour of festive feel-good classic Love Actually.

The 2003 film by Richard Curtis (of Four Weddings and Notting Hill fame) starring an ensemble cast led by Hugh Grant, Liam Neeson, Bill Nighy and Emma Thompson is a favourite at this time of year.

So what better to bring on the festive feels than a showing of the movie in HD on a giant screen with its musical score played by a live orchestra?

Filmmaker Curtis has built a career from pulling on our heartstrings – and no more so than in Love Actually where a series of ten interweaving storylines reflect on the meaning of romance.

The script is finely tuned – designed to take our emotions on a sweeping Santa sleigh ride.

And the musical score, by Craig Armstrong, is integral to that journey.

The live orchestra works to enhance this experience – and what a joyful one it is.

Conducted by George Jackson, the score was performed by the Senbla Concert Orchestra.

If you can’t watch Love Actually without reaching for a hanky – seeing it with a live orchestra requires a entire box of Kleenex!

Emotions are heightened, particularly in the finale as the characters race – in some cases literally – to unburden themselves before their chosen ones.

It is rare for an entire audience to wait patiently until the movie credits finish before making for the exit. But the crowd wanted to deliver their appreciation for the faultless production – by means of a standing ovation.

Love Actually – in concert is playing just 15 dates across the UK ahead of Christmas.

For everyone at York Barbican last night, it was an early Christmas treat indeed.