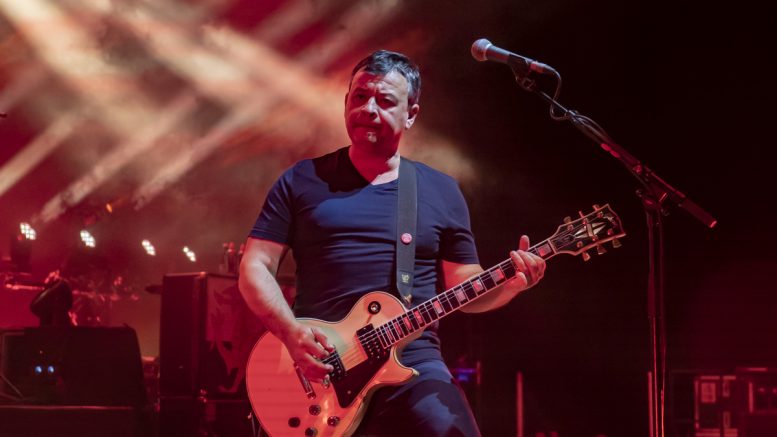 IT’S hard to believe that the Manic Street Preachers’ new album, The Ultra Vivid Lament is their 14th such release and even harder to believe that it is their first number one album for 23 years. The new release continues their habit of writing memorable tunes even if the album – which was largely written on the piano – is not quite as rock driven as some fans might.

On Monday, their current tour visited York Barbican where they delivered a crowd pleasing and colourful show consisting of established favourites sprinkled with new material.

As if to contrast with the new material the band also delved extensively into their first release playing four songs from their first album, 1992’s Generation Terrorists, as well as three from their previous chart topper 1998’s This Is My Truth Tell Me Yours.

Opening for the band were the fast-rising Low Hummer, a six piece band from Hull who delivered a short set comprising of songs from their promising debut album Modern Tricks For Living. The dual vocalists, Dan Mawer and Aimee Duncan, give their sound a welcome diversity, and they’re well worth keeping an eye on. They are on the Live at Leeds bill on October 16 so catch them if you can.

As you would expect from such experienced veterans the Manics know how to pace a show and keep the audience happy. Opening in a barrage of colourful lighting with Motorcycle Emptiness was a crowd-winning start. The deceptively catchy and melodic Orwellian followed, where the band’s lyrics examine the erasing of context within debate and how it is used to stoke the culture wars on social media. It couldn’t be a more archetypal Manic Street Preachers’ song if it tried.

Your Love Alone Is Not Enough remains one of my favourite Manic songs and they delivered a terrific version of it before another song from the new album The Secret He Had Missed.

The band were now well into their stride – Ocean Spray, You Stole the Sun From My Heart, and the gentle Still Snowing in Sapporo before a towering version of Everything Must Go.

International Blue was followed by a crowd singalong to If You Tolerate This Your Children Will Be Next. The cover of Guns N’Roses’ Sweet Child of Mine went down a storm as singer/guitarist James Dean Bradfield handled the solos deftly.

When not scissor jumping or bouncing up and down on the spot, bassist Nicky Wire looked impassive behind his shades as he stalked smoothly around in front of his amps which were draped in their customary Welsh flags, and for once, drummer Sean Moore was clearly visible behind his kit thanks mainly due to the Barbican’s low stage.

The band powered through their set stacking the closing part of the show with no fewer than three songs from their debut album – Slash ‘n’ Burn, Spectators of Suicide, and You Love Us.

There was only one song that was going to close the evening and of course A Design For Life ensured the show finished on a high.

It’s always a good experience seeing the Manics performing live, and the current tour sees them as strong as ever. If you missed them they are in Leeds at the O2 Academy on Wednesday (7th) and of course, they will be playing at Middlesbrough’s Riverside Stadium next June when they support The Killers on the Las Vegas band’s huge UK stadium tour.