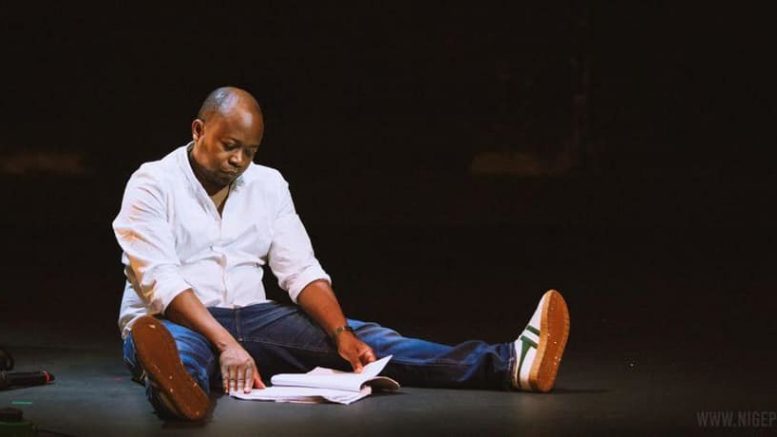 IT has been a long wait for Zimbabwean-born writer-performer Tonderai Munyevu to premiere Mugabe, My Dad & Me.

The English Touring Theatre & York Theatre Royal production has gone through two pandemic-imposed postponements, three workshops and a transfer into an audio dramatisation for Audible.com.

The play had long been billed as a one-man show but the published text states the presence of an Mbira player is compulsory, and sure enough, after Tonderai’s introduction and back story, the Theatre Royal curtain rose on actor-musician Millie Chapanda, in sun-bright African dress, with Zimbabwe’s national instrument by her side.

Mugabe, My Dad & Me has been in a state of flux, moving from its planned Studio baptism to the main house, growing in length from 70 minutes to around 90 minutes, and switching from the Theatre Royal’s Summer Of Love programme to The Haunted Season.

Which would he prefer? “I think ‘Haunted’. It sounds longer lasting. ‘The Summer Of Love’ sounds impermanent,” Tonderai said in his interview with The Press.

As it turns out, the play suits both: there is love, for his late father and the motherland he left with his mother for a new life in London at the age of 12; and there is sex, Soho nights and all.

There is a haunting presence too: the figure of President Robert Mugabe, the freedom fighter turned despot, a permanent representation of Zimbabwe in Tonderai’s life until the barnacle president resigned at 93 in 2017.

Tonderai set himself the writing task of working out his identity, who he is, where he belongs, by constructing a memory play but one that does not stop in the past but informs the Tonderai of today, Tonderai at 39: a gay, Catholic, Zimbabwean writer and actor, who lives in London and will be marrying next year.

Taking to the stage in a white shirt, overlapping his blue jeans, he recalls being asked “Where are you from?”, as he poured a pint when working as a barman in one of those fallow times that actors grow accustomed to enduring.

It was this question that prompted him to look for answers in Mugabe, My Dad & Me. “I need to work things out, to understand about my father, about Mugabe, about all these ghosts from the past,” he says in the prologue to Scene 2.

“I need to wrestle with where I stand in it all. With who I am today. This isn’t going to be an easy or straightforward story to tell,” he forewarns. It won’t all make sense, as much to him as to us, he cautions, but he turns out to be a highly coherent storyteller, shining a light on the chaos, chance and contradictions of life.

Set and costume designer Nicolai Hart-Hansen conjures memories and ghosts of Tonderai’s past by hanging row upon row of clothes above his head, a constant presence that is lowered or raised, depending on the scene.

The garments represent Tonderai, his mother, his father and Mugabe through the years, as well as uncles, aunts, his first lover, and Bob Marley at his famous Zimbabwe concert (although apparently Mugabe wanted Cliff Richard, considering Jamaican reggae icon Marley to be “too crude”).

Those clothes weigh heavy on the unfolding drama, like Banquo or the ghost of Hamlet’s father, but they rule out the need for any other means of evoking people or place, Tonderai’s words sufficing on their own.

The only “prop” is a chair for Millie Chapanda, as she changes position on the stage to suit the focus of each scene, under the concise yet poetic direction of Theatre Royal associate John R Wilkinson.

As the title suggests, Tonderai weaves together the impact of his father and Mugabe, the “father” of his homeland, and is unsparingly frank in his appraisal of both.

His father, a bright and good looking “everyman”, was a womaniser, a wife-beater, a drinker, who died in desperate circumstances, as impoverished as the “bread basket of Africa” became in the later years of Mugabe’s presidency.

His father had worked at an accountancy firm, until a dispute with a white colleague ended with him punching him. Told he would not be fired if he apologised, he declined to do so, losing his job, setting a spiral of decline in motion.

Piece by piece, Tonderai puts the jigsaw together to explain his father’s incendiary character, recalling how belatedly he learned of the trauma that had shaped him.

As for Mugabe, in the climax to the play, Tonderai confronts the late President, by now represented in full regalia, as to why he turned from revolution to tyranny, failing those who had been promised a fruitful farming future after guerrilla service in the name of freedom and ending colonial rule.

Encountering the personable, forthright Tonderai over these 90 minutes, this son of the Zimbabwean diaspora has his heart in his still-troubled southern African homeland, its culture and heritage, and yet he appreciates the freedoms brought to him by London life. Does that leave him in a no man’s land or a place of opportunity? Both, but roll on next year’s wedding, he will say.

One frustration in this male-dominated story: we learn next to nothing of his mother, but maybe Millie, her mbira and her calming presence can be read as testament to her influence.