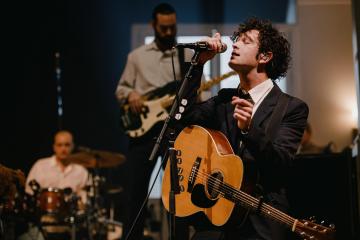 THE 1975 are a Wilmslow band who arrive in Leeds a decade after what lead singer Matty Healy describes as their ‘first proper 1975 gig’ performing to 70 fans at the local Cockpit 3.

How times have changed for the Brit Awards winners as they perform to a sold-out Leeds Arena as part of their much anticipated ‘The 1975 At Their Very Best’ tour.

Healy is an enigmatic, quirky and charismatic frontman whose edgy speeches about social media, masculinity and politics reflects a confident yet tormented soul. Several months on from their successful Leeds Festival headliner, expectations are high as media coverage of recent on-stage exploits, surprise guests, sexualised theatrics and political outbursts all add to the build-up.

As the band arrive on stage, their names appear on big screens like movie credits. The stage is stunning, a theatre-style cross-section of a house reminiscent of a 1980s TV set, its interconnected rooms, lamps and furnishings all having a place in this remarkable show as the band and their white-coated stagehands move between rooms during songs.

There are no surprise guests this evening as the band perform two distinct sets, one of the entire new album and the other of previous classics. The band are sensational, Healy playful and relaxed with his Elvis moves, cigarette and hipflask as the band work through the wonderful Part of the Band, the gentle Something About the Weather and the future classic Caroline.

In a bizarre and unsettling spectacle, Healy breaks between two sets by chewing on a slab of raw meat, wrestling with his role as idol, spokesperson, artist and provocateur and making him a magnet for the press.

The 1975 in Leeds. Photo by Jordan Hughes

Appearing awkward at times, Healy treats the crowd to an incredible back catalogue. The band launches into the fabulous TOOTIMETOOTIMETOOTIME followed by the wonderful I Like America and America Likes Me, Healy climbing the spiral staircase to stand on the roof of the house, relaxed yet reckless as he sings “I’m scared of dying”. He presents as a frustrated artist, provoking memories of Morrisey and the late Michael Hutchence at their peak.

The adoration of the crowd is palpable as Healy moves between the generous and self-indulgent and, as the rest of the band leave the stage and turn off the lights, the frontman unbuttons his shirt, makes sexual gestures and does press-ups as he watches clips of Thatcher, Sunak and Putin on retro TV sets.

The crowd sway in unison to It’s Not Living If It’s Not With You and, while some see The 1975 as distracting and stunt-driven artists, the show was undeniably impeccable – The 1975 at the peak of their career to date and performing At Their Very Best.