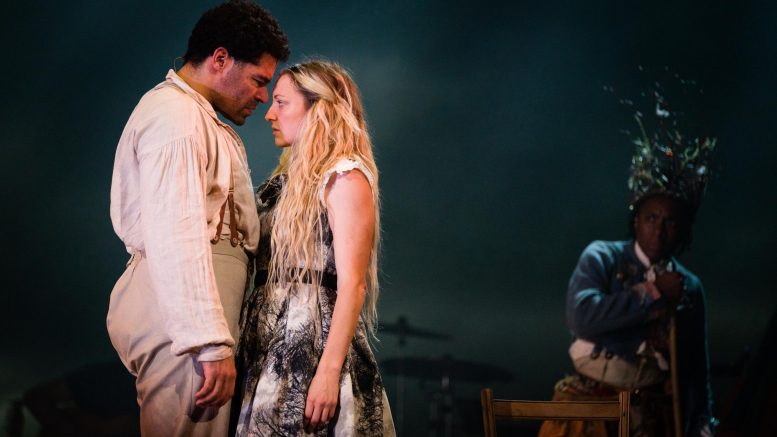 FIVE years ago, when Emma Rice all too briefly ruled the Globe, executive producer Tom Bird told her he would be fleeing the Shakespeare nest to move to York. “I’m going to do Wuthering Heights,” she told him that day.

Bird, now York Theatre Royal’s chief executive, recalled Rice’s vow at Wednesday’s post-show Q&A session, as the two friends from London days discussed Wise Children’s gothic musical play that felt like it had indeed “come home”, as both Bird and Kate Bush before him, put it.

In turn, Nottingham-born Rice remembered childhood walks up to the Top of th’ Withens the West Riding house said to have inspired Emily Bronte’s Wuthering Heights on her Yorkshire visits.

True to her word, Wise Children artistic director and former Kneehigh theatrical pioneer Rice has made her Wuthering Heights, in tandem with production partners York Theatre Royal, the Bristol Old Vic and the National Theatre, no less.

As eggs is eggs, and Rice is Rice, the wait for Wise Children’s third visit to York has been well worth it, and sure enough the Theatre Royal snapped, crackled and popped with excitement as smiling, exhilarated university theatre students took their turn to be photographed with an ever-obliging Rice in the foyer in the post-show buzz.

How come there is so much life in Emma Rice’s Wuthering Heights when there is so much death and “so little love” in Emily Bronte’s Wuthering Heights (with a helpful, if grim family tree at the beginning of the digital programme)? Because she doesn’t look at life the way that others might, or tell it the way others might. Take, for example, her opinion that Emily Bronte is an “overlooked comic genius”, presenting as evidence the foppish Lockwood (Sam Archer) and Little Linton Heathcliff (Katy Owen), “the most despicably funny character ever written”.

Or how Rice transforms the Yorkshire moorland into a character, The Moor, led by Nandi Bhebhe, the narrator in a crown of thorns and twigs. All but Lucy McCormick’s Catherine Earnshaw and Ash Hunter’s Heathcliff play The Moor in Rice’s ensemble and even McCormick is seen shaking a stick feverishly in the first evocation of the moorland, amid the sound and fury of the live band’s percussive clatter signifying everything about Yorkshire’s tight, stifling grip.

Bhebhe’s ill weather-forecasting Moor and cohorts become the equivalent of Macbeth’s witches, both McCormick’s Cathy and Hunter’s conversing directly with her, although the cautionary Moor is trying to save them from themselves.

Who cannot but love the team play in writer-director Rice’s shows, as exemplified by those Moors: the Moors, the merrier, as it were. Her cast sits attentively to the sides, always in view, visibly enthusing in each other’s performances as they conjure what Hunter calls her “theatre magic”.

Rice pulls off the feat of being deadly serious and yet seriously funny too; one review even used the words “camp” and “pastiche” to describe elements of the performance style, and there is something of the affectionate irreverence of Lip Service’s Withering Looks show about Rice’s script, not least when she comments on why do so many men’s names begin with H and why do so many characters have similar names?

Helpfully, each death is registered on a chalk board as well as being signified by dark birds in flight across the projection screen but there is a greater motive behind those boards: Rice’s passionate belief in the importance of literacy, a learning tool that was denied to Hareton by Heathcliff.

Rice is an audacious theatre-maker; she takes chances and invariably they pay off, typically in her casting choices, most notably maverick, fearless performance artist Lucy McCormick as her “unwell, prisoner-of-her-time Cathy, neither tortured romantic heroine, nor minx”.

“Lucy is a rock star,” she reasoned, and as if to prove the point, banshee McCormick suddenly grabs a microphone at one point, her locks tossed asunder by a fan, for an ensemble dance number that could have come from Rent or Spring Awakening as much as from the people’s operas of Brecht & Weill.

There is so much to love about Rice’s Wuthering Heights; the echo of Lawrence Olivier’s black-and-white film 1939 film in the title wording on screen; Vicki Mortimer’s set and costume designs, especially the towers of chairs; the use of puppetry and dance and projections; Ian Ross’s songs, whether in folk musical major keys or minor keys for bleaker undercurrents; the musicianship of Sid Goldsmith, Nadine Lee and Renell Shaw; the way this is anything but the Heathcliff and Cathy show.

Katy Owen brings such heart to her double bill of spoilt toffs, Isabella and Little Linton; Sam Archer is playful as the absurd Lockwood and grave as the inadequate Edgar Linton; Tama Phethean’s glowering, towering Hindley and Hareton Earnshaw, the one bruising, the other bruised, hit home, and while Rice’s company makes you feel they are all scene stealers, none does more so than Craig Johnson’s deathly-camp Dr Kenneth.

Ultimately, spread over this revenge tragedy’s ensnaring three hours, this is more Heathcliff’s Wuthering Heights than Cathy’s, on account of Rice’s most serious social commentary of all, on racism, prompted by her visit to the Calais Jungle. Hunter’s intense, brooding, raging Heathcliff is the refugee, the outsider, of Jamaican roots, abused and mistreated. “Cruelty breeds cruelty. Be careful what you seed,” cautions Rice.

And yet, amid so little love and so much 19th century grimness up north, Rice finds an uplifting finale so beautiful that it brings tears of joy.

Tickets are still available; crack the whip, like Rice’s Cathy and Heathcliff, and book every last seat. Box office: 01904 623568 or at yorktheatreroyal.co.uk.