YORK flood defences came within 40cm of being overwhelmed in February – as three storms battered the country.

And plans to make Millennium Bridge accessible during flooding have been put forward by the council.

Fortunately levels did not reach those predicted – but a City of York Council flood review says significant areas of the city centre and villages were in flood alert status for more than three weeks, riverside routes were underwater for most of February and about 60 businesses were affected.

The review says about 1,056 properties were protected using temporary measures, such as sandbags, but adds: “The impacts would have been greater if the resultant river levels were only 400mm higher, key temporary defence measures in the city would have been overwhelmed.

“Although the formal defences in York were not endangered by the forecast and actual levels during the event the temporary defences deployed in the Peckitt Street/Tower Place/Clementhorpe areas of the city defend to a level of 4.8m. They were therefore likely to be overwhelmed or extremely tested in the forecasted peak levels on three occasions.”

The council will look at making Millennium Bridge accessible during riverside flooding, following the completion of the Clementhorpe flood defence works. The western access route was flooded three times earlier this year.

Cllr Andy D’Agorne said: “Access to the west side of Millennium Bridge during a flood is an issue that has been raised in a number of flood events over recent years.

“Currently, cycle and pedestrian access from the west side of the bridge (from Butcher Terrace) floods at a much earlier level than the access to the east side (from Maple Grove) meaning that the bridge route is inaccessible during significant flood events.

“We raised the issue of Millennium Bridge access in the review of the February floods and have committed to investigate and deliver works to raise the western access to the bridge to make it more resilient in future flood events and to maintain access for the many residents who cycle or walk the route all year round.

“We have agreed to hold the works until after completion of the Environment Agency Clementhorpe flood scheme which begins this autumn. Work to raise the western access to the bridge is likely to take place in late 2021 to early 2022.”

The review says the council’s response to and recovery from the February floods cost the local authority about £180,000.

The review is set to be discussed at a virtual meeting on Wednesday at 3pm. Watch online at youtube.com/user/cityofyorkcouncil. 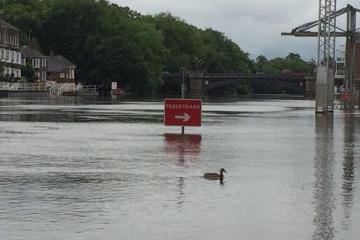