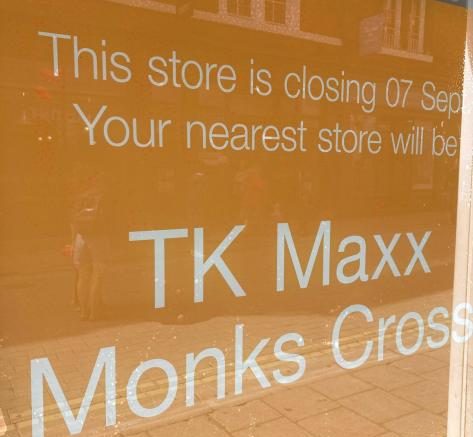 A Major retailer is pulling out of York city centre almost 12 years to the day since it opened.

TK Maxx opened in the former Boots store in Coney Street back on September 4 2010, but the store, famed for selling designer labels at High Street prices, is shutting it’s city centre store on September 7.

A large sign in the window announces the closure saying their next nearest store will be the TK Maxx and Homesense at Monks Cross after that.

As The Northern Echo’s sister website, The Press reported back in May, there are plans for TK Maxx to be replaced by a Hard Rock Cafe after York-based property development company North Star to bring the American diner-inspired brand to the city.

If the planning application is approved, the developer Star believes the Hard Rock Café will play a pivotal role in kick-starting the regeneration of the city’s high street through the creation of more than 75 jobs.

It should also bring significant economic growth to the city both through direct job creation and through support of local suppliers and services.

According to Hard Rock: “The location plans to showcase an open kitchen concept as well as Hard Rock Cafe’s new brand style that will draw on inspiration from the city.

“For epic group entertainment experiences, a stage is a pivotal part of the design that will showcase both local and international acts.

“Private event spaces will be available for meetings, groups, and private dinners.”

A spokesman for North Star said: “This is hugely exciting for us and demonstrates our passion, confidence, and commitment to both the city and the region. We know and care passionately about York and have worked hard to create this incredible opportunity to bring a global brand to the heart of Yorkshire.

“We are in positive discussions with York Council and very much hope to bring Hard Rock Café to the city, as part of our commitment to investing in and further enhancing what we believe is the best city in the UK.”

The first Hard Rock Café was founded in 1971 in Mayfair, London. It began decorating the interior with rock’n’roll merchandise in 1979, a tradition which has continued as the group expanded worldwide in the 1980s.

Today, it has venues in more than 74 countries, including shops, hotels and casinos as well as the cafés.