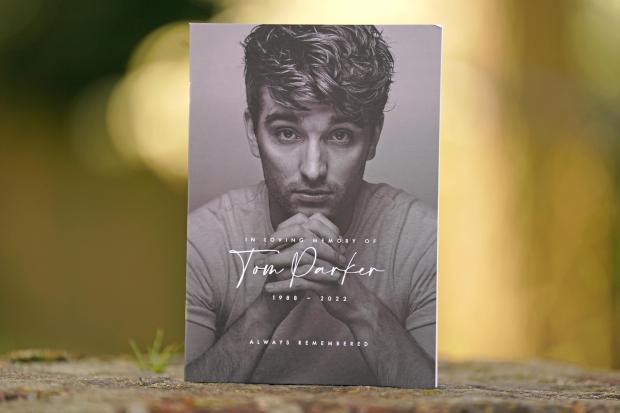 Hundreds of fans lined the streets for a procession ahead of the funeral of The Wanted star Tom Parker on Wednesday.

The pop singer’s widow, Kelsey, whom he married in 2018, led a cortege featuring three black horses through Petts Wood in south-east London on Wednesday morning.

Flowers spelling out the word “Daddy” adorned the side of the carriage while a flowered sign that spelled the word “Tom” in red roses was attached to the front.

How did Tom Parker die?

The singer leaves behind two children, Aurelia, two, and Bodhi, one, as well as wife Kelsey.

See pictures ahead of the service where fans lined the streets and bandmates arrived to pay their respect.

The order of service for the funeral of The Wanted star Tom Parker. (PA)

The members of The Wanted (left to right) Max George, Jay McGuiness, Siva Kaneswaran and Nathan Sykes (partially hidden) arrive for the funeral of The Wanted star Tom Parker. (PA)

The coffin of The Wanted star Tom Parker is carried ahead of his funeral. (PA)

Max George (left) and Jay McGuiness of The Wanted (centre) carry the coffin at the funeral of their bandmate Tom Parker. (PA)

Max George and Jay McGuiness of The Wanted carry the coffin at the funeral of their bandmate. (PA)