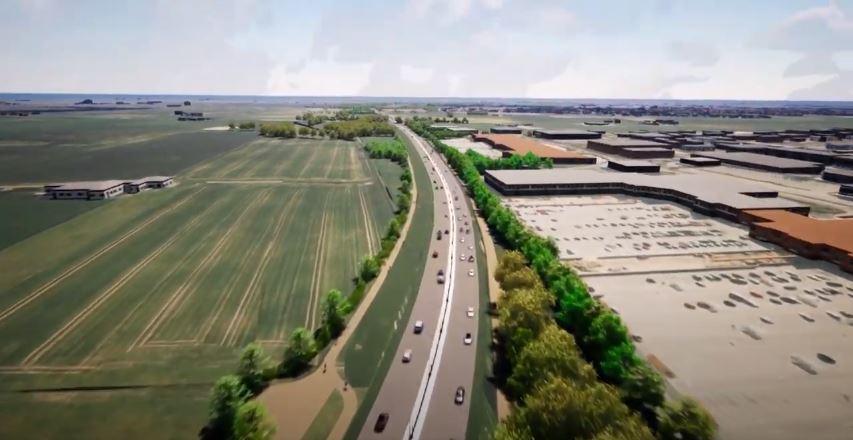 YORK Green Party says plans to dual the York outer ring road – the A1237 – “cannot be justified” and the current proposal “should be scrapped.”

Under the plans the single carriageway would be dualled in both directors between the A19 at Shipton Road to A1036 at Little Hopgrove.

York Green Party has submitted its response to the consultation on the plans.

It says investment in sustainable transport, rather than widening of the outer ring road, is needed.

A statement from the party said: “We say that it cannot be justified.

“York City Council has declared a climate emergency with the need to be carbon neutral by 2030. The York Green Party is arguing that the current proposal will simply lead to more traffic and greater emissions.

“In addition to that the time savings are tiny for the £38 million that it would cost, and the money would be far better spent on improving the provision for cycling and walking.”

The statement said all that the dualling will achieve is to increase traffic “through induced demand; not only on the ring road, but on the radial routes too.”

It added that dualling “will, inevitably, lead to more traffic coming into the centre of York and there is no provision to prevent this.”

“We will therefore see more congestion and higher levels of pollution in the city leading to more illness and death,” it said.

Tom Franklin, chair of York Green Party, commented: “The current proposal goes completely against the council’s own policy of becoming carbon neutral and therefore should be scrapped.

“The money should instead be used to reduce dependence on cars in York. If we reduce the number of cars by improving bus routes and provision for walking and cycling then the dualling becomes unnecessary.

“The current designs includes an incomplete cycle route and dangerous roundabouts that will do nothing to encourage people to cycle or walk as a route is only as safe as its most dangerous part.

“At the very least there needs to be proper underpasses at each and every roundabout or traffic light controlled crossings for each crossing.

“Without this we will see cycling limited to the brave and the foolish and not opened up to everyone.”

City of York Council’s Liberal Democrat Group has sent The Press a response to the statement from York Green Party. Cllr Stephen Fenton said: “The Liberal Democrats have lobbied extensively for years to secure Government funding to dual and upgrade the York Outer Ring Road and I know local residents and businesses will be pleased to see the scheme progress.

“The funding commitment of £38 million by the West Yorkshire Combined Authority, £25 million from the Department for Transport, along with additional contributions of £8.6 million (which includes the council’s own contribution of £3.6 million) has enabled us to progress the scheme, as we continue to make the case to the Government for additional funding in order to accelerate the delivery of this crucial scheme.

“Dualling the outer ring road is crucial to improving the daily lives of many residents and businesses, not just in York, but across the region.”

Cllr Fenton also said that upgrading the ring road provides an opportunity to reduce congestion and journey times on one of our busiest roads.

“This will help to redistribute traffic in and around the city and see car journeys move out of the city centre, aiding our continued work to improve air quality across York and invest in the transport modal shift that is needed to achieve our ambitious goals of addressing the climate emergency,” he said.

“This vital upgrade will not only provide a new and efficient route for drivers but will also gives us a great opportunity to integrate sustainable travel infrastructure into a significant part of the city’s road network, with the development of over 6km of new shared footpaths and cycleway network – helping the city become a cleaner and greener place to live.

“Creating safe walking and cycling routes alongside and across the ring road will help to make possible more sustainable transport options for residents of the outer villages and reduce severance impact of the ring road.”

A “BULLY” who launched a “brutal and unprovoked” attack on a teenager in York has been jailed for four months. York Press | News …

A MAN was left with cuts and bruising to his face after he was allegedly attacked by a youth in York. York Press | News …

POLICE in York are appealing for information to help locate 15-year-old Chloe Anne Johnson, who has been missing from home for five days. York Press | News …