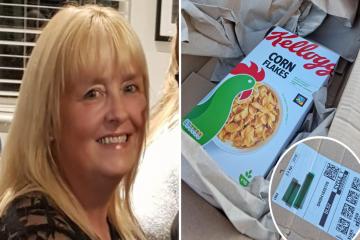 A York woman was left “horrified” after ordering an £850 laptop on Amazon – and receiving a box of cornflakes instead.

Ann Marie Cork, 56, from Huntington, ordered the expensive new computer from the online retail outlet to treat herself.

But when her purchase arrived on October 27 the delivery driver told her there could be a problem, as the label on the parcel said it weighed 2.9kg, yet the box was very light.

He filmed her opening the package on her doorstep – and they found that instead of a new laptop, the parcel contained a box of Kellog’s cornflakes.

The box of Cornflakes that Ann Marie received instead of a laptop (Image: Ann Marie Cork)

Ann Marie, who works in customer resolutions herself, said: “He seemed just as horrified as I was, I couldn’t sleep a wink that night.

“I just bought the laptop for myself. I had a manky old one and just wanted to treat myself to a new one, but I will never order anything like this from Amazon again.

“I want to make it clear that I hadn’t done anything wrong when making the order, totally nothing at all.”

The delivery driver sent the video to his boss to report the incident, and Ann Marie took this as evidence along with her photos of the delivery and doorstep CCTV footage.

Ann Marie said she then had to undergo lengthy exchanges with Amazon in a bid to get a refund.

“I understand that they have to check things to be sure, as people can try to fool them into giving them money, but I had all this evidence as proof,” she said.

“They kept forwarding me on to different seniors and executives in their customer services.

“They said if I wanted a new laptop I’d have to place an order again – they didn’t send me a new one.”

Ann Marie received a full refund from Amazon and a £50 discount on Amazon Prime on November 6.

Amazon say they believe they have now resolved this matter to “the customer’s satisfaction, and a full refund was processed, with a small gesture of goodwill for the negative experience”.

An Amazon spokesperson said: “We are investigating the incident and have worked with the customer to make things right.”

Ann Marie now wants to raise awareness of the issue, as she claims similar incidents have happened before.

“I found on their Facebook page and other news stories online that this has happened to others, both across the country, the US, and abroad, going back a few years,” she said.

“Someone received a mop instead of a laptop, a chocolate bar instead of an iPhone, baby wipes instead of a phone, an empty Armani watch box, and a bottle of coke instead of whiskey.”