Lockdown has challenged many ways of life, but York’s running community has continued to thrive, race and give back.

Through to early March, York’s many running clubs were still pounding the streets; training nights were still training; races were still racing; and hundreds were still gathering on Saturday mornings at the City’s three parkruns – on the Knavesmire, in Heslington, and in New Earswick – to complete their regular 5k runs.

And then all fell silent.

Social distancing stopped all of these activities. But it has not stopped York running, racing and raising a smile.

My own club, York Knavesmire Harriers, has used its active online community to keep the running spirit alive. Our Facebook page alone has more than 1,000 followers, and our brilliant members have continued to share their training exploits and running adventures – to entertain and enthuse.

In April, for example, the Harriers competed in the UK’s first ever “virtual” national road relay championships.

We “virtually” joined more than 5,000 runners from across the country.

Each runner completed their own leg of the relay, and we then submitted our times to the central organisers.

Virtual racing goes far beyond the Knavesmire Harriers. For example, a new online York Virtual Run Club has been created. Regular “virtual” races challenge more than 100 ‘virtual’ runners to compete and share their running achievements. A club that didn’t exist three months ago is now very much part of the York running community, thanks to its volunteer organisers and “thanks” to lockdown.

Parkrun has also not gone quietly. Although the hundreds are not currently able to gather as they once did, many continue to complete their own Saturday morning 5k runs and share their photos, and their smiles, via social media. As the popular social media hashtag says, runners continue to #LoveParkRun, despite lockdown.

York’s runners are also giving back at this time of need.

Every January, 2,000 runners gather at the racecourse to compete in the 13.1 mile race.

The money raised by the event is normally used to fund the Harriers’ training and racing activities.

But with no formal training or racing we decided that the money could be better used by six local charities. A total of £4,500 has been donated by the Harriers to Move the Masses, SASH youth homelessness, St Leonard’s Hospice, York Against Cancer, York Foodbank and York NHS. This equates to £10 from every Harrier. We saw this as a small way of giving back to city that we love, and in which we live and run.

The government’s own research has found that many people have been finding more time to exercise during lockdown, and many hope they will continue to do so when restrictions ease.

Nearly one million people have downloaded the NHS-backed “Couch to 5k” app, providing a structured nine-week introduction to running.

Maybe you could give it a go? The physical and mental health benefits of running are well reported, and arguably more important today than ever before.

Lockdown has stopped many things, but it has not stopped York running.

Our running community looks set to emerge stronger than ever whenever full lockdown ends.

Join us at the start line!

Alistair McQueen is the chairman of York Knavesmire Harriers 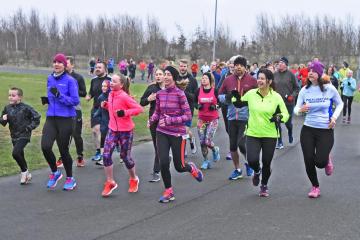