York’s nightlife is not all about nightclubs however. There are plenty of places in the city where you can stay out and party till the early hours. The Swinegate/Little Stonegate area has a number of bars with late licenses and DJs on a Friday and Saturday night (and often a Thursday as well) including Kennedy’s, 1331, Bobo Lobo (York’s Latin Quarter), The Biltmore and Sotano.

Next to the cinema and overlooking the river, Revolution gets very lively at the weekend with DJs and bars across two floors. Back on Micklegate, The Artful Dodger has a Metal/Rock/Punk night on a Friday and The Falcon Tap a little further up hosts music events in its bunker room. The Nook on Castlegate has a DJ on a Thursday and the atmosphere is a bit more relaxed here than in some of the larger bars (it’s not open that late however).

York’s largest nightclub is Kuda which is set across three floors of the old York Institute building on Clifford Street. Society and Salvation, on opposite sides of Rougier Street, offer a similar night to Kuda although on a smaller scale. Mansion, the new name for the old Ziggy’s, seems to have rebranded itself as the home of more ‘serious’ dance music. Like Kuda and Fibbers, on weeknights during term time Mansion hosts student events. Fibbers operates as multi-function venue. Lollypop! has transferred here from The Duchess and is the Saturday offering. Although you have to pay to get in, once inside drinks are cheap and the offers are plentiful.

The Duchess closed recently but their club nights have relocated elsewhere. Although not a nightclub in the traditional sense, The Crescent Community Venue – originally a working men’s club – hosts regular music events. The Herbal Mafia York’s biggest and longest running Hip-Hop, Dubstep and D’n’B night happens here and Irie Vibes brings the Reggae, Dancehall and Dub with headline acts and local selectas. There are two bar areas so on some nights there will be two events running simultaneously.

Fibbers is York's first choice for the best touring and local bands for 22 years, with packed clubs too. More than six thousand shows and over twelve thousand bands; most of what you see on today's big festival stages has been inked in the Fibbers diary at one time or another by Tim Hornsby (Mr H) between 1992 and 2008, and from 2010 onwards. 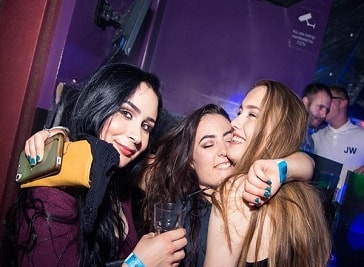 Salvation is recognised as the most vibrant club in the city. Housed across three buildings the club comprises of two main rooms plus a large outdoor rooftop terrace. York's NO 1,Club Salvation in York has great nightclub offers to give you the best experience possible. Our team is looking forward to taking care of you and we will do everything we can to make your clubbing night here fun, safe and extra special.
Read More