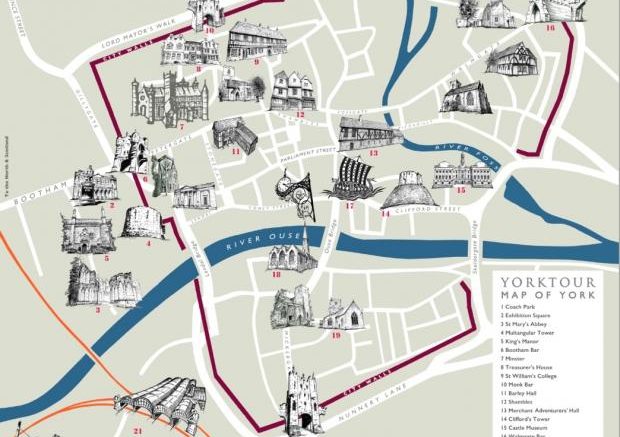 Journalist and Yorktour director ALFRED HICKLING has written a new guidebook to York. He explains why…

Another guidebook to the city of York? Surely dozens, even hundreds of the things exist already? Well yes – and no.

My wife and I recently became directors of Yorktour – a company that has been introducing visitors to the city for over forty years – and a question we are frequently asked is whether there was a book that follows the route we had taken? Nothing too deep and definitive, just an accessible, entertaining history of the city with some up-to-date photography and a selection of the stories that make the place unique.
Realising that there wasn’t anything quite like that on the market, we decided to write it ourselves. 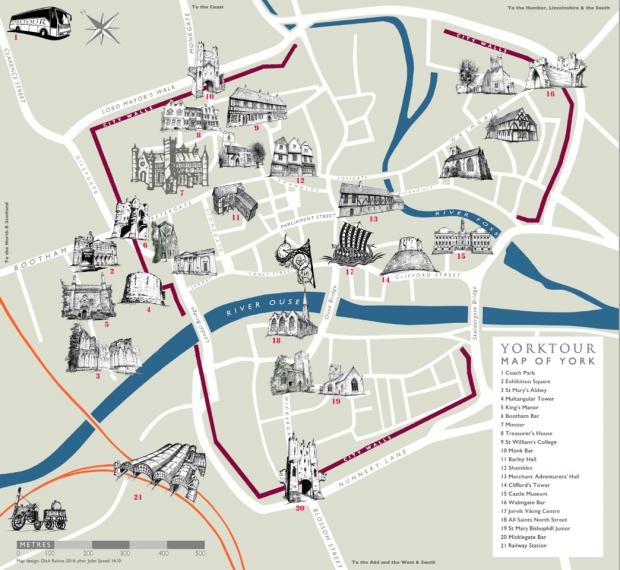 The map of York from Alfred Hickling’s new book

In compiling the new book, Yorktour: A Walk Through the Walled City, I wanted to pay homage to two inspirational books that had opened my eyes to my home town as a teenager – Patrick Nuttgens’ York: the Continuing City and Mark W. Jones’ A Walk Around the Snickleways of York.

The second, in particular, has become legendary for its off-beat approach, meticulous calligraphy and dry, companionable humour. It would be very hard to improve on those – yet both of these books first appeared in the 1980s, when Barley Hall was yet to be uncovered behind a layer of dirty, Victorian brick and the stucco of Fairfax House was still smothered beneath multiple layers of emulsion paint.

Having plotted a new route through the city, we decided that what we really needed was an original map. So the book comes with a fold-out street plan, based on the first map of the city printed by John Speed in 1610. At the centre is Speed’s quixotic – and frankly unrecognisable – woodcut image of the Minster, to which we have added later additions in John Speed’s style. Hence it is the only map of York in which you will find a John Speed railway station, a John Speed Coney Street clock and a John Speed Viking museum.

The book is being launched at Clifton Library’s Summer Fair on July 22 from 10am-1pm, where I’ll be happy to sign copies, exchange stories and say hello. But who is it primarily intended for? Obviously the 300-plus tourist groups we bring to the city each year who kept asking for it. But also anyone who lives in, or has lived in York and fancies becoming absorbed in an armchair guide that shows the city looking as proud and resplendent as it does right now. And if there’s a single teenager who happens to pick it up, follow the route, and fall in love with a place they had previously taken for granted, I will be very well satisfied. It’s what Mark W Jones’s Snickleways did for me.